By Anosh Malekar
In 1930, Mahatma Gandhi turned salt into a powerful symbol of freedom for Indians. In Independent India, the traditional salt pan workers of Gujarat say they are living like slaves, thanks to the government’s negligence and privatisation p

olicies
Agariyas are worried heavy vehicle movement will impact the salt quality
The stillness of the Little Rann of Kutch was interrupted in early-December 2008 by a fleet of heavy vehicles, earthmovers, tractors and trucks, their movement causing clouds of dust to rise in the air. Dust can wreak havoc with the salt pans, making the salt yellowish and reducing its price. “The salt workers were initially worried about the impact of the movement of heavy vehicles on the quality of salt, but soon realised the bigger threat,” Sukhdev Patel, founder-president of the Agariya Hit Rakshak Manch or Salt Workers' Welfare Forum, said. He was referring to a mud wall being constructed across several kilometers inside the Little Rann to demarcate a recent sub-lease of land by Hindustan Salts Limited (HSL) to a private firm.
HSL, a public sector company, had stopped manufacturing salt a few years ago, claiming financial losses. But it remains the biggest holder of lease land in the Little Rann. It continues to fulfill its quota of supply to various government entities including the army by buying salt from traders in the open market. In 2000, it approached the Board for Industrial and Financial Reconstruction (BIFR) which decides the fate of sick public sector units in the country, and was sanctioned a revival scheme. A total of 994 salt workers employed with it were offered a golden handshake. Having no money, HSL offered them small pieces of land out of its reserve of 23,000 acres for making salt.
The British era water sup 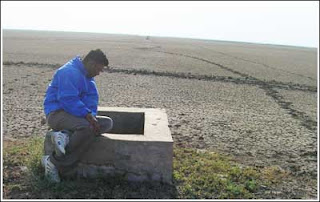 ply scheme inside Little Rann
The latest sub-leases – some 2,300 acres to Chennai-based Brahmani Mata Salts and another 500 acres to Sai Mata Salts, also from the south – caused serious apprehensions among the salt workers from Kharaghoda. And adding fuel to the fire, HSL declared a voluntary retirement scheme for the last 97 salt workers on its rolls – offering Rs 1.19 lakh each – within days of the sub-leases to private firms becoming public knowledge. Patel said the main issue was not employment for 97 salt workers, but the entry of more private salt manufacturers, which was a direct threat to the traditional rights and livelihoods of over 2,000 salt workers and their families from Kharaghoda.
Salt workers like Bacchubhai Gandabhai and Pralhadbhai Jayarambhai were concerned that the heavy equipment and deeper bores used by the private firms would dry out their wells. ‘We do not dig beyond 50-60 metres, but these companies go up to 150-200 metres. It can adversely impact the water table.” HSL top officials refuted the charge. “Some vested interests are trying to instigate the salt workers, telling them the private firms would make more and better quality salt and snatch away their livelihood. But they will not succeed,” a senior official said. “We are trying to revive a loss-making unit. HSL has switched to trading salt as this is less capital- and labour-intensive than manufacturing the commodity”.
The senior official, who did not want to be identified, further explained that HSL was sub-leasing to private salt manufacturing firms to prevent illegal encroachment on its land. Besides, the lease amounts also served as a vital source of revenue. The 500 or so protesting salt workers and activists, who caused temporary suspension of the mud wall construction in mid-January 2009, came around soon after a team of top HSL officials rushed to the Little Rann from its headquarters in Jaipur. Their much-touted satyagraha or Gandhian protest inspired by Gandhi’s salt march at Dandi and planned for Republic Day on January 26, 2009, also fizzled out. 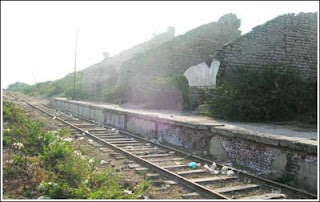 Kharaghoda was connected by a broad-gauge line
during the British
The most surprising thing in the entire episode was the stony silence of Gujarat’s forest officials. It is not humans alone that stand to be affected by the increased human and industrial activities. The Little Rann is after all the last refuge of the endangered Asiatic wild ass. The forest officials acted only after Dhrangadhra Prakriti Mandal, a local NGO working for the protection of the wild ass sanctuary, filed a public interest litigation before the Gujarat High Court, raising many issues including HSL's right to sub-lease land and to build the wall in an area declared by the Gujarat government as Kutch Biosphere Reserve (KBR). The high court served a notice to the state's forest department and ordered a stay on the heavy machinery work in the area.
“The state forest department’s only concern appears to be to throw the impoverished Agariyas out of the Little Rann. Last year, it even blocked a government plan to lay a pipeline inside the Little Rann to provide potable water to the Agariyas. Now, when a mud wall is being constructed virtually dividing the wild ass’ grazing area into two, the forest authorities choose to be mute spectators,” social activist Ishwarbhai Desai said.
Salt workers like Kantibhai, who is among those offered VRS by HSL, felt his lot would have been better under British rule. “From what we have heard our elders say, they (the British) took good care of our people. Those were the glory days at Kharaghoda. The salt pan worker was a king then.” Historian-journalist Ambubhai Patel agreed: “Under the British some 900 families were employed permanently in salt-making. Kharaghoda was connected by a broad-gauge line, and the railway link extended into the Little Rann. Also, they built an excellent water supply scheme whose remnants exist inside the Little Rann to this day.”
I was taken to see another symbol of Kharaghoda’s past glory -- the Bulkley Market – by local activist and an expert guide to the Little Rann, Savshibhai. It is a Gothic structure built in 1905 by a British collector of salt taxes named Mr Bulkley, who, according to the cornerstone, “interested himself greatly in welfare of the village”. He also gave Kharaghoda an excellent hospital, equipped with isolation wards for patients with communicable diseases. “If you ask me, I would give the British 90 marks out of 100, and not even 10 to Indian governments for what they have reduced us to,” Ambubhai Patel said at the end of the tour.
Earlier, Savshibhai took me on a day-long tour of the Little Rann and a few surrounding villages to observe the conditions in which the salt workers survive today. There is no drinking water here anymore. The salt workers and their families buy water from a tanker that comes every week, if they are lucky. Otherwise, they either trek on foot or cycle 10-15 kilometers to fetch drinking water. “There is no water, no fuel, no school, and no hospital... nothing near by,” complained Leelaben Labhubhai. "We work like donkeys in the salt pans without a day off for eight months. We get to bathe every 15 days, that is the only luxury 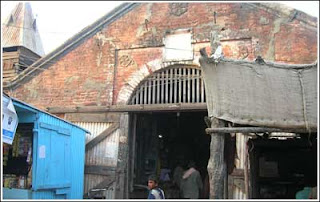 we can afford here.”
The Bulkley Market in Kharaghoda
If given an option, the salt workers say they would gladly give up salt harvesting. Leelaben’s husband, Labhubhai, said he cannot perceive a way out of the exploitation by traders and middlemen, and the inaction by governments. "We are living like slaves in a free country. Earnings from the salt pans are diminishing, as the expenditure on pumping brine is going up due to a gradual fall in the water table each season,” he said, explaining how some have had to abandon their salt pans halfway through the salt-producing season because there was not enough brine. “Lately, salt pans have become a risky venture,” Labhubhai concluded.
People like Labhubhai and Leelaben are treading a thin line for survival and will need more then just salt to sustain them in future. Once the government decides on settlement of land rights inside the Little Rann, and implements a proper habitat management plan aimed at protecting the wildlife, the salt pan workers will be an endangered species. The government at the moment is silent on this issue, but senior forest officials in Gandhinagar confirmed that only those salt workers holding leases issued before January 12, 1973, will be considered `authorised claimants’ during the settlement process. A large majority of salt workers, who hold salt pans as sub-leases from merchants or private companies, will have to lose their only source of livelihood once the wild ass sanctuary plans take off.
I could not miss the bitter irony in all this. In 1930, the Mahatma and his 78 followers marched 241 miles across the state of Gujarat to the salt pans on the Dandi coast – proclaiming resistance not just to Britain's ban on the private production of salt, but to its colonial reign. It was Mahatma Gandhi who elevated salt to a powerful symbol of purity, tradition and freedom for Indians. In Independent India, the indigenous harvesting and marketing of salt is exposed to the catastrophic consequences of government’s negligence and privatisation policy.
Sadly, the natural salt industry is dead and gone in Dandi too, being replaced by chikoo and mango farming over the decades and, of late, by shrimp culture. Aquaculture Farmers’ Association secretary Manoj Sharma said: ”The salt industry has died a natural death. People have found more lucrative alternatives than keeping land aside for vast salt pans. There are over 100 ponds for shrimp farming in and around Dandi, with an annual turnover of around 500 tonne, having an estimated value of about Rs 4 crore.”
Not surprisingly, the state government now wants to promote prawn culture inside the Little Rann to create new job opportunities for the next generations of salt workers. Modi has promised that the much touted Rs 11,000-crore scheme for the development of Gujarat’s coastal areas and fisheries will also percolate down to the salt workers. “This is sad. Instead of promoting our salt, which is both organic and highly edible, India wants to close down its biggest salt pan. If this salt was manufactured in the West, I am sure they would have sold it for the price of gold,” local historian Ambubhai Patel said.
Many like Patel, who have been associated with salt making since their birth, felt the entry of more private players -- at last count some seven companies had entered the salty desert -- would lead to overexploitation of the natural resource. And it won’t be long before traditional salt making becomes history in the Little Rann.
InfoChange News & Features, March 2009
http://infochangeindia.org/Livelihoods/Salt-pains/Bleak-future-for-traditional-salt.html
Posted by Treditional Salt Farmer's Collective of Gujarat, India. at 7:48 PM