Inside India's Survey No Zero

he Little Rann of Kutch. In 2007, they were asked to make way for a wild ass sanctuary in the area. The Agariyas are staking their claim to this land which has never been surveyed, pointing to an edict from Mughal Emperor Aurangzeb which grants them rights to this land
Whenever I go back in memory to the Little Rann of Kutch, I realize that the landscape is clearly fixed for me in time and place. I can conjure up the image without difficulty because over the years this extraordinary place in Gujarat on India’s west coast has retained all its colours – the cracked brown vastness of the mudflats under a searing white sun, the bare horizon without a spot of green, the azure sky devoid of a single cloud, and men, women and children of the Agariya community engaged in neat square fields of steadily evaporating salt waters. The blaze of sunlight reflecting from the white salt deposits scalds the eye, but the jagged mural formed by the Agariya’s primitive salt-making activity accompanied by the rare sight of a wild species, a herd of wild ass or a lonely fox, completes the landscape.
Life is tough in the Little Rann (the Kutch desert is divided into the Little Rann and the Great Rann) with temperatures soaring above 50 degrees Celsius during peak summers and dropping to near zero on winter nights. In June, the monsoons herald the invasion by the Arabian Sea through the Gulf of Kutch causing the mudflats to disappear under knee-deep water for four months and, as a consequence, become saline. The salt-impregnated wilderness spreads over 5,180 sq kms and is also known as India’s ‘Survey Number Zero’ because no land survey has been conducted here since the British left.
The Office of the Settlement Commissioner & Director of Land Records at Dr Jeevraj Mehta Bhavan in Gandhinagar said the state government had no land data and no survey number to identify the Little Rann. This is surprising because for centuries the saline desert with extremely sparse vegetation cover has been a vital source of livelihood for a large number of people, mainly salt workers, and a rare habitat for a thriving population of one of the endangered sub-species of the Asiatic wild ass (Equus hemionus khur).
The Survey of India (SOI) topographical maps of 1960 vintage used to estimate the habitat, vegetation cover and salt fields, have proven inadequate in documenting changes in its land-use over the centuries. And the resulting absence of a proper habitat management plan has led to an increase in the conflict between man and the wild in recent decades. Environment and wildlife groups are concerned that salt cultivation and the accompanying human activity is threatening the sparse vegetation that is so vital to the existence of the wild asses, turning them into crop predators and thereby triggering the human-animal conflict. 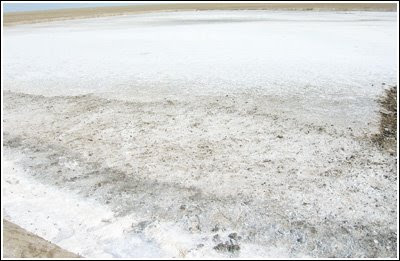 Some say salt making is a threat to the wild ass
However, activists working for the welfare of the salt workers argue that the wild ass has thrived over the years inside the Little Rann. According to Gujarat Ecological Education and Research (GEER) Foundation, the population of the sub-species has been increasing since the 1990s, and may reach 4,000 by 2010 from 362 in 1969. “This proves there is no human-animal conflict. The salt workers, who have lived here for centuries, have co-existed peacefully with the wildlife,” Harinesh Pandya of the Agariya Hit Rakshak Manch or Salt Workers' Welfare Forum said.
Pandya had earlier filed an application under the Right to Information (RTI) Act with the State Revenue Department, seeking details of surveys conducted in the Little Rann of Kutch since 1947. The application sought to know the number of land surveys, the survey number, exact demarcation of the desert according to the jurisdiction of the different districts it falls under, and rights of the traditional communities and other tribes in the area. The application was forwarded to the District Inspector of Land Records (DILR) Office in Kutch, which in turn informed him that no survey of the region had been conducted so far. "They told me that this was the reason why the region does not even have a survey number," Pandya said.
After nearly two years, on January 29, 2009, the state information commission issued orders, directing the Revenue Department, Office of the Settlement Commissioner & Director of Land Records, and the DILR office in Kutch, to submit complete and correct information to the RTI applicant within three weeks from the receipt of the order. “This type of ambiguity on the Little Rann puts a huge question mark on all that has been happening here. Not only is there no survey number, there seems to be no clarity about whose jurisdiction the area falls under,” Pandya said.
According to the DILR, the area known as Little Rann of Kutch fell under the jurisdiction of six districts of Gujarat – Kutch, Rajkot, Surendranagar, Patan, Jamnagar and Banaskantha. The DILR further mentioned that the area was notified as Ghudkhar or wild ass protected forest and an officer of the level of additional collector was in charge of work relating to this. But the State Forest Department’s public information officer (PIO) and the deputy conservator of forests had no details to offer on the issue. Similarly, the PIOs of Banaskantha and Rajkot district administrations refused to provide information saying that the RTI queries from Pandya did not pertain to their jurisdiction and that no such area was part of their districts.
After multiple transfers of the RTI application, with no desired information forthcoming, Pandya finally moved the Gujarat Information Commission. "I took this step, as the area is of strategic and ecological importance. Every inch of land in India has been surveyed. It is strange that there is no information about such a huge area. Land survey is also important because the traditional rights of salt pan workers and some nomadic tribes as well as other tribes staying in this area have been under official scrutiny.” 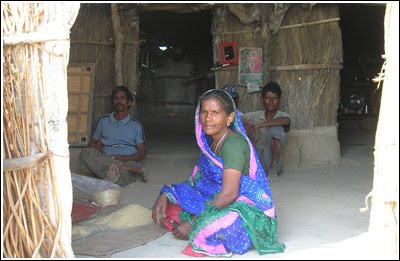 Salt workers can claim only traditional rights to land
The seeds of the present conflict were sown when the first set of notifications for the Wild Ass Sanctuary in the Little Rann of Kutch was issued on January 12, 1973 under the Gujarat Wild Animals and Wild Birds Protection Act, 1963. The sanctuary was proposed on a total area of 4840.899 sq km across four districts of Surendranagar, Rajkot, Patan and Kutch. The second notification came in 1978, under the Wildlife Protection Act, 1972, covering some more peripheral area and taking the total area of the sanctuary to 4953.7 sq km.
In early-1997, an office was set up by the state government for the survey and settlement of the claims of traditional dwellers of the sanctuary in Surendranagar. Predictably, they have been up in arms ever since. An assemblage of NGOs led by Harinesh Pandya of Janpath, which works for the welfare of salt pan workers, and Sukhdev Patel of Ganatar, which runs mobile schools for their kids, are lobbying the state government to end the uncertainty over their existence inside the Little Rann. Interestingly, while the State Forest Department has issued eviction notices to the salt workers, the state government has provided identity cards to nearly 41,000 of them, certifying them as traditional salt pan workers.
Land rights issues involving salt workers in Gujarat are much more complicated than say farmers affected by government attempts to acquire their privately owned farmland for special economic zones (SEZs) or other industrial purposes elsewhere in the country. The majority of the salt workers do not own land. They are holders of traditional lease of arid and fallow land for `salt farming', issued by the government to individual salt workers and their cooperatives as well as some 20-odd private firms. Until 1963-64, this renewable lease for a plot of five to ten acres was for 10 years and thereafter for five years.
When the Centre decided to reserve the land for a sanctuary to protect the wild ass, the State Forest Department, as the official implementing agency, started attempts to acquire land inside the Little Rann. Interestingly, while the companies' leases continued to be renewed as usual, the individuals' leases were not renewed from 1997 onwards. The salt workers were finally issued eviction notices in 2007. But sensing popular protest in an assembly election year, the state government led by Chief Minister Narendra Modi promised to try and persuade the Centre to reconsider dislodging the salt workers. The government is presently seeking documented evidence from the Agariyas to establish their right to produce salt inside the Wild Ass Sanctuary.
With no official surveys or documents to help establish their traditional rights over land inside the Wild Ass Sanctuary, the threat of eviction and subsequent loss of livelihood has been a constant for salt pan workers for some time now. In a bid to help dispel the eviction cloud, representatives of NGOs working for them claim to have gone to the extent of digging out a historic 'farmaan' (ordinance) issued by Mughal emperor Aurangzeb in 1669, where the salt pan workers of Halvad in Surendranagar district find a mention.
Harinesh Pandya stumbled upon the book Salt Industry in India, a pre-Independence era British publication to which the farmaan has been appended, during a visit to the Salt Commissioner's office in Jaipur in 2007. He has presented the farmaan issued by Aurangzeb as documentary evidence of the traditional claims of Agariyas over their land before the Surendranagar Additional Collector, who is in-charge of settling the land claims.
"The farmaan clearly indicates that proper land records and distribution systems were in place for the Little Rann of Kutch even during the Mughal period,” Pandya said. Assigning the Mahal or district of Halud – a part of Ahmedabad Subah – as a jagir to Nazar Ali Khan, the farmaan describes the Subahs comprising of 112 villages and salt pans, as generating revenues of 25. 8 lakh dams (dam was the currency in circulation during the period).
Pandya hopes the Mughal-era farmaan will help set the records straight. "It is impossible for the Agariyas to produce any recent documentary evidence of their customary rights," Pandya said arguing that the onus lies with the government to seek and find the evidence.
InfoChange News & Features, February 2009