Salt of the earth

By Anosh Malekar
Little has changed for the debt-ridden Agariyas since 1872, when salt production began in the Little Rann of Kutch. They labour in the harsh sun and briny waters with no protective gear, earning 12-15 paise for each kg of salt produced 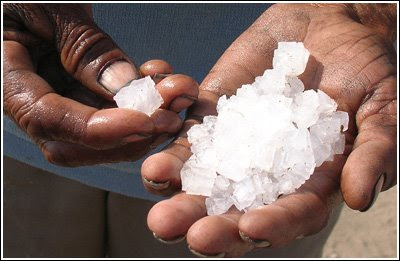 Salt production in Little Rann dates back to 5000 years
An estimated 43,000 people – salt workers, their families and dependents – are engaged in salt farming during the September-March season in the Little Rann, many of them living for eight months in conditions comparable to medieval times. Salt production in the Little Rann dates back 5,000 years, but it was the British who came to regulate it and transformed Kharaghoda, a remote village then, and now located in Surendranagar district, into a salt hub. Local historian-writer Ambubhai Patel said: “Historical sources indicate that by the middle of the 19th century, British India derived 10% of its revenues from the monopoly of salt. The salt pan workers from Kharaghoda and other smaller villages on the periphery of the Little Rann have been the unsung beasts of burden of the salt industry since then.”
In British India, salt was a government monopoly. Indian salt was heavily taxed to enable the import of English salt. Despite the symbolic defiance by Mahatma Gandhi’s salt satyagraha at Dandi in 1930, followed by satyagrahas in different parts of the country against the salt tax, it was not repealed until Jawaharlal Nehru became the President of an interim government in 1946. In free India, salt is an “essential item” and a Central subject. All aspects of the salt industry are controlled by the Salt Commissioner from Jaipur in Rajasthan.
Soon after Independence domestic salt production was encouraged and the country became self-sufficient before long, in 1953. Today, India is the third largest producer of salt in the world and some 5 million tonnes of its annual production of 17 million tonnes are exported. The country owes this primarily to the centuries of hard slog by 150,000-odd salt pan workers in the coastal and desert regions of the country which often lack even basic amenities like drinking water, hospitals, schools and markets. Perhaps the pitiless landscape of the Little Rann typifies the situation of India’s salt workers.
The nature of the Agariyas’ existence can be gauged from the fact that even today they use broken pieces of mirror to flash messages during the day across long distances inside the Little Rann, much like the native Americans and Australian aboriginals used fire to send smoke signals. “The conditions of the Agariyas had changed little since Sir Charles Pritchard of the Bombay Salt Department started production of salt inside the Little Rann in1872. The method of making salt (solar evaporation of subsoil brine) is the same, the measure for salt (one cubic square inch) is the same, the piece-rate system of payment is the same, even the day of annual payment (Janmasthami festival) is the same,” Patel said.
The Agariyas migrate here every year from the 109 villages bordering the Kutch desert after the monsoon. It’s a vicious cycle that begins with an Agariya family seeking an advance or loan from a wholesale salt trader who pre-fixes the price at which he will buy the salt from them at the end of the season. The advance or loan money will meet the running costs of manufacturing salt and afford subsistence living for the family in a temporary shelter on a plot adjoining the pans.
The entire family, including children, first constructs a hut and then prepares the fields, hardening the land surface and raising embankments with their bare hands and feet to create about a dozen evaporation pans, measuring approximately 200 ft by 250 ft. Simultaneously, they dig a shallow well and with the help of Rajkot pumps, a locally manufactured contraption that operates on crude oil, start drawing saline groundwater into the first of the pans. 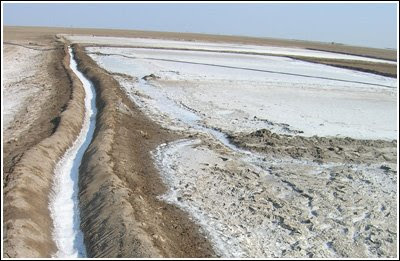 Salt is produced in series of chores that remain unchanged for centuries
In a series of chores that have remained unchanged for centuries, the briny water is then transferred from one pan to another through narrow channels to increase the salt content before it reaches the final pan where it starts producing salt. During the four months this process takes, they frequently scrape the surfaces of the salt pans with very heavy wooden rakes to even out the salt, which is slowly captured and dried by the heat, transforming the pans into hard fields of coarse salt ready for harvest.
The salt that the Agariyas produce is locally known as Badagara, simply meaning salt produced in the Bada (big) Agara (pan). This inland salt in large-grain crystal form is distinct from the marine salt produced in the coastal regions of nearby Saurashtra. Gujarat produces 70% of India’s salt and inland salt from the Little Rann accounts for almost 40% of this.
Inland salt sells for Rs 3-5 per kg, mainly in the markets of north India and Nepal, which does not produce any salt, but the Agariyas of Little Rann get just about 12-15 paise a kg, less than their production cost in most cases. A chain of middlemen—traders, transporters and retailers—grab most of the profits, leaving little or nothing for them. There is a popular saying in this part of Gujarat: “Debt is what an Agaria never fails to bring back home”, referring to his return from the Little Rann to the village at the end of the salt manufacturing season.
Halfway through the season, in January 2009, when I visited the Little Rann, it was no different. I could barely hear their querulous tones amidst the cantankerous clatter of the crude oil pumps. “Last Janmasthami we agreed to a price of Rs 15 per 100 kilograms. Right now our salt is selling at Rs 45 in the Patdi town market,” Labhubhai Bababhai said. Labhubhai hails from Kharaghoda, now a big village with 12,000 residents. It is barely 7 km from Patdi, the relatively prosperous town of local salt traders. Kharaghoda is sometimes referred to as the village of widows because some 500 local women have lost their husbands at a relatively young age. The death figure is unusually high, but hardly surprising considering the majority of the dead men are Agariyas.
Most of the salt pan workers come from the impoverished Koli and Chuvaliya Koli tribes. Working as bonded labourers in harsh conditions and exploited for decades, they generally die young. Throughout their working lives -- they start very young as children of sever or eight years -- the Agariyas are known to face serious physical and mental health hazards. Working in extreme temperatures without any protective gear against the high exposure to sun and salt, many Agariyas suffer blindness and skin damage. The exposed body parts get covered in an abrasive coating of salt, drastically reducing their life expectancy. “Even a small cut takes months to heal,” Labhubhai said. 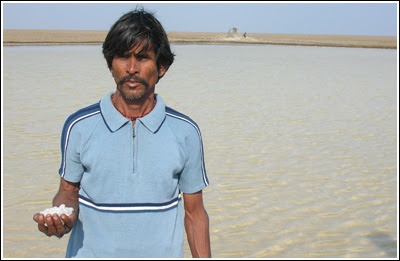 Agariyas work in extreme temperatures without protective gear
According to the latest available report prepared by the Union Ministry of Labour and titled ‘Working and Living Conditions of Salt Workers in India’, “The Aghariyas, who depend exclusively on salt processing, live in very poor conditions. There is a lack of basic amenities like drinking water, shelter, education and facilities like gumboots, sunglasses, tools and healthcare….. Children are brought up on salty land with no activities for growth. The seasonal workers live on the pan itself….They face health hazards like blisters, burns, cuts, eye burning, falling hair, headaches and many other ailments. Lower legs and feet develop lesions like ulcers and wart. Skin problems occur like scaling, atrophic scars, keratodermia, callosities, and fissures. This facilitates enhanced absorption of salt into the body, which could be one of the causes of high blood pressure. They also have to drink saline water most of the time. The incidence of Vitamin A deficiency, night blindness, tuberculosis, infant mortality and gynaecological problems are common”.
The late Dilip Ranpara, a Gujarati writer who published a book on the exploitation and sufferings of salt pan workers in the early-1990s, has described how the Agariya’s hands and legs take more time to burn on the funeral pyre than his body because a lifetime spent working in salt causes them to harden and become nearly acid-proof. The book, titled Kali Majuri, Dholo Mithoo (Black Labour, White Salt), is often quoted by social activists in public and official forums. But still, not many people are aware of this darker side of common salt.
The Agariyas in Kharaghoda recalled the Agaria Kalyan Sammelan (Conference for the Welfare of Salt-Makers) organised by Gujarat Chief Minister Narendra Modi at Patdi to announce his government’s grand plans to develop the Navlakhi Port in Kutch near the Little Rann of Kutch with a special jetty dedicated for salt export so as to fetch the best prices for salt workers. “The proposed port will cut down transportation costs and give a boost to the local economy, at a time when the Railways have failed to provide any concession in freight charges for salt. Also, the government wanted to develop a Rann-based tourism plan,” said a senior aide of the chief minister in Gandhinagar.
The salt workers, with little or no education, fail to comprehend such grand development initiatives. All they have known is a poverty-stricken existence along the coast. Their already difficult life has been made even tougher by the deadly triumvirate of natural disasters at the beginning of the past decade – the cyclone in 1998, droughts in 1999 and 2000, and a deadly earthquake in 2001, when the governments of the day failed to help them substantially. As one salt worker, unconsciously stating the problem as he looked across the bountiful hot fields of salt, said: "What good are these grand promises when the governments cannot provide us drinking water, hospitals and schools. If anything, the government of the day should protect us from outside companies coming here to destroy our livelihood".
Privately-owned medium to large companies account for more than two-thirds of the total 1 million tonnes of salt produced annually inside the Little Rann of Kutch. They use much the same methods as the salt workers to "harvest" their produce. But they machine-process the raw crystals of salt into consumer-friendly fine salt, and iodise it. In comparison the ordinary salt worker extracts and sells the salt at slightly lower prices in the form of unprocessed, roughly bagged, iodine-sprayed crystallized salt. This crude product tends to harden into a single lump if touched by damp.
The marginalisation of the small producer has been an issue in the Little Rann for over a decade now. But things came to a head at the end of 2008.
InfoChange News & Features, February 2009
http://infochangeindia.org/Livelihoods/Salt-pains/Salt-of-the-earth.html
Posted by Treditional Salt Farmer's Collective of Gujarat, India. at 8:18 PM