Promises of politicians rub in salt on wounds of Kutch agariyas

BRAVING A TOUGH DESERT LIFE FOR CENTURIES, SALT PAN WORKERS WAIT ENDLESSLY FOR A SAVIOUR
ELECTIONS come and go, but the precarious world they live in never changes. These are the 43,000-odd agariyas or salt pan workers engaged in salt farming for eight months, from September to April, in the Little Rann of Ku 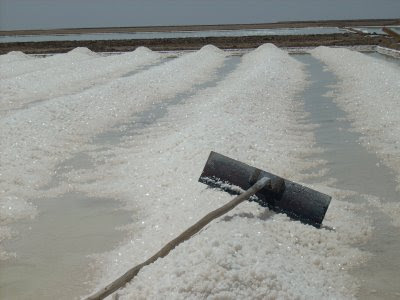 tch.
Hopes were raised in 2007, when just before the state Assembly elections Chief Minister Narendra Modi had organised an Agariya Kalyan Sammelan (salt pan workers welfare conference) at Kharaghoda in Surendranagar district. But, as Navgham Surda, one of the local community leaders of agariyas puts it, ” Things have moved at a snail’s pace.” Earning just over 15 paise per kg of salt produced and inhabiting an area spread over 5,180 sq km (also known as India’s Survey Number Zero, as no survey has been conducted here since Independence), these agariyas have been experiencing the toughest desert life for centuries. But with a few votes, and that too which is hardly ever exercised as they are away for most of the year, they have become politically irrelevant.
Though politicians, on their part, are never short of promises, what remains to be seen is the real implementation on ground.
For example, during the conference in 2007, Modi had announced the government’s plan to develop the Navlakhi Port near the Little Rann, with a special jetty for salt export to give a big boost to its production. Other promises included a cycle per agariya family, mobile health vans, mobile schools, safety kits to help in salt farming as well as housing provisions in the 109 villages in the periphery of Little Rann.
Marut Bariya of Agariya Hit Rakshak Manch, an organisation trying to mobilise the community comprising the three de-notified tribes of Miyana, Sandhi and Chuvaliya-Koli, said: “Exploitation by big companies and rich traders leading to acute poverty among the agariyas, lack of basic amenities like drinking water and shelter, and safety tools like gumboots, sunglasses as well as healthcare, should be the issues, and not some grand development initiatives like a new port.” Now, with the proposed sanctuary for wild ass in the Little Rann and the government not renewing the leasing rights of agariyas, the salt pan workers are most likely to be deprived of their only source of livelihood.
Bheemani Jaresa, another agariya community leader, said: “Although some measures like a mobile ration shop and potable water supply through tankers are being initiated, these are certainly not enough. Our demand is that the government must introduce a Minimum Support Price for the salt produced by us on the same lines as given to farmers for agricultural produce.” The political parties must understand this is the only way to free agariyas from chronic poverty, he added.
Posted by Treditional Salt Farmer's Collective of Gujarat, India. at 6:20 PM